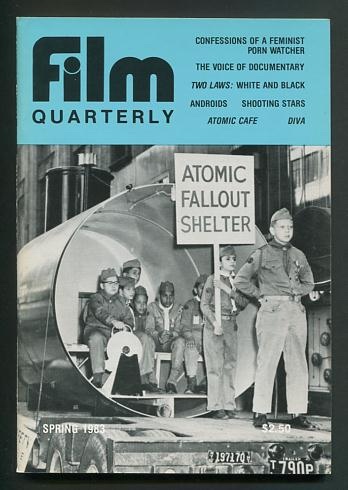 [nice clean copy, just a trace of handling wear]. (B&W photographs) In this issue: an interview with Vittorio Taviani; "Confessions of a Feminist Porn Watcher," by Scott MacDonald; "The Voice of Documentary," by Bill Nichols (including discussion of SOLDIER GIRLS, ROSIE THE RIVETER and WEDDING CAMELS); an article about racial discrimination and ethnographic filmmaking in Australia, with focus on the documentary film TWO LAWS; "Human Artifice and the Science Fiction Film," by J.P. Telotte (discussing THE THING, INVASION OF THE BODY SNATCHERS and BLADE RUNNER). Films reviewed: ATOMIC CAFE (documentary) and DIVA (Jean-Jacques Beneix). Book review: "Figures of Desire: A Theory and Analysis of Surrealist Film." Also: a contentious exchange of correspondence between Bill Nichols and Fabrice Ziolkowski, over the latter's criticism of the former's book "Ideology and the Image." ***NOTE that we have many issues of this and other film-related periodicals that are not listed online, and we welcome your inquiries.