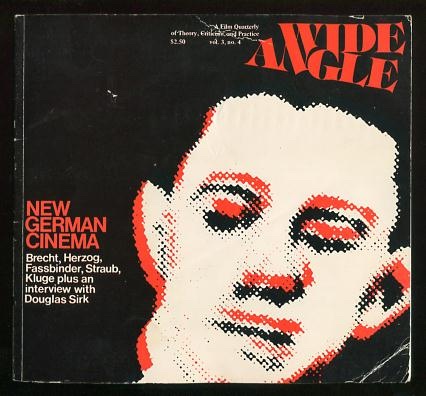 [some wear at edges and corners, a couple of short creases in front cover]. (B&W photographs) Issue devoted primarily to German cinema. Contents: an analysis of the influence of Berthold Brecht on the film medium; a discussion of three films by Werner Herzog "seen in the light of the grotesque" (EVEN DWARFS STARTED SMALL, FATA MORGANA and AGUIRRE, THE WRATH OF GOD); analysis of Rainer Werner Fassbinder's THE BITTER TEARS OF PETRA VON KANT; a selection of writings by Alexander Kluge; analysis of Jean-Marie Straub's NOT RECONCILED; an analysis of the 1942 Nazi documentary DER EWIGE JUDE and its relationship to anti-semitic ideas in the Third Reich; an interview with Douglas Sirk; a discussion of "patterns of violence towards women" in Fritz Lang's WHILE THE CITY SLEEPS; an interview with Norman McLaren; a review of Noël Burch's book "To the Distant Observer: Form and Meaning in the Japanese Cinema." ***NOTE that we have many issues of this and other film-related periodicals that are not listed online, and we welcome your inquiries.