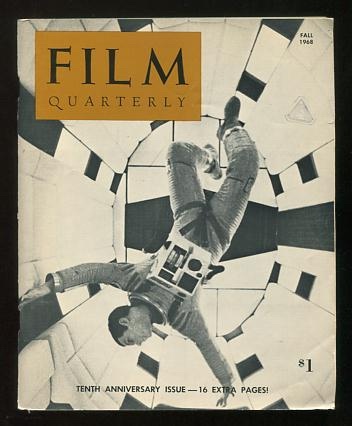 [light handling wear only, a nice clean copy]. (B&W photographs) In this issue (the Tenth Anniversary Issue): "Looking Back," an article by editor Callenbach reflecting on the development of film culture since the magazine's founding; "Harlequin's Stick, Charlie's Cane," a long article by David Madden exploring the relationship between slapstick movie comedy and the commedia dell'arte; an interview with film critic Judith Crist; an article about Norman McLaren's use of stop-motion animation; an examination of the films of Carl Linder; an article on "Animation in Zagreb" (Yugoslavia). Films reviewed at length are: MOUCHETTE (Robert Bresson); PLANET OF THE APES and 2001: A SPACE ODYSSEY (reviewed jointly); THERESE AND ISABELLE (Radley Metzger); PETULIA (Richard Lester); and CHINA IS NEAR (Marco Bellocchio). Shorter film reviews include: THE BRIDE WORE BLACK (Francois Truffaut), THE GREEN BERETS (John Wayne), and RACHEL, RACHEL (Paul Newman). ***NOTE that we have many issues of this and other film-related periodicals that are not listed online, and we welcome your inquiries.