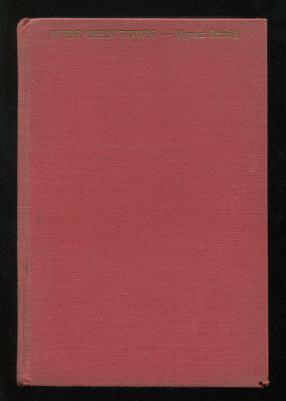 (no dust jacket) [a somewhat worn copy, with slight fraying/exposure of boards at several corners, moderate soiling to bottom of text block, spine cloth a bit faded, gilt spine lettering rubbed but still readable; binding solid, text clean]. The second of the author's "Butte novels," set in that Montana City (re-christened "Silver Bow"). (The first was "Singermann," published in 1929.) Born in Minneapolis in 1896 to Romanian/Jewish immigrant parents, Brinig moved with his family to Butte at the age of three and grew up there. Although he got out of town as a young man (he lived primarily in New York from about 1914), he returned again and again to his early life and family history -- he would ultimately write a total of six novels with a Montana setting over the course of his career -- to present an autobiographically-infused portrait of life, particularly Jewish-American life, in that rough-and-tumble Western burg. In the case of "Wide Open Town," the return was literal as well as literary: he wrote the book during a return visit to the city, following the success of his early novels. By all reports, he harbored bitter feelings toward the city of his childhood and youth, however, and didn't hesitate to depict its seamy and corrupt aspects; the plot of "Wide Open Town," for example, deals with a Catholic youth who develops a passion for one of the town's prostitutes, which doesn't end well. (Brinig displayed a particular fascination with Butte's red-light district, which also figured prominently in the plot of "Singermann"; it's also been pointed out by critics that the author's bisexuality, and the fact that Butte was unquestionably a "man's town," factored in to his negative feelings about the place.) Although Brinig frequently treated homosexual themes in his fiction, he reportedly kept his own sexuality under wraps during his lifetime -- which, ironically, seems to have worked against his posthumous reputation: he was never very highly regarded as a "Jewish novelist" (perhaps because of his attraction to those very themes), and his unwillingness to be identified as a "gay novelist" has probably contributed to his work being given rather less attention from that angle than it deserves. ("The Gay and Lesbian Literary Heritage," published in 1995, credits him with creating "the first significant gay character to appear in American Jewish writing" (Harry Singermann in the early book), but also states that he was "not gay," and doesn't grant him an entry of his own in the book. His 1932 novel "This Man is My Brother" is included in the Young bibliography, and is discussed in Anthony Slide's 2003 book "Lost Gay Novels.") This is the only one of Brinig's many novels to have been reprinted since his death in 1991.