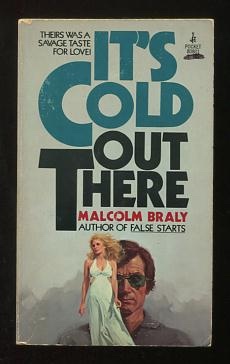 It's Cold Out There

[solid copy, slight spine roll, minor abrasions and a bit of edgewear to covers, printed price blacked out on front cover]. Mass Market PB The author's third novel, about an ex-convict whose desperate need for money leads him to take a job selling encyclopedias door-to-door, which gets him involved with the variously strange residents of the Bali Hai Apartment Court. Braly wrote his first three books, all of which were published as paperback originals in the 1960s, while serving a series of prison sentences for burglary, at Nevada State Prison, San Quentin, and Folsom State Prison. His next (and best) book, on which he began work after his release from prison in 1965, was "On the Yard" (1967), widely regarded as one of the best prison novels ever written.

Title: It's Cold Out There

It's Cold Out There