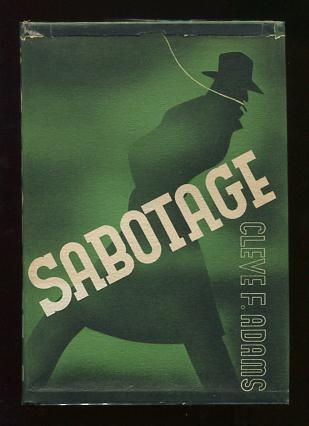 [possible ex-rental library book, unmarked as such but exhibiting all the other signs: the covers are worn and stained, ditto the endpapers and the dust jacket, all as a result of the jacket having long been imprisoned in one of those awful old protective covers--the ones with the black strips along the top and bottom edges, that permanently adhere to the jacket and inevitably result in gunky black staining (as here) to the edges of the book covers; anyway, the book is kind of a mess, and yet with the jacket re-covered in new mylar it actually presents reasonably well, and makes a perfectly acceptable reading copy]. "In the hell-raising Nevada boom town of Palos Verde, commercial saboteurs are trying to wreck the greatest dam project in United States history. A hundred million dollars is involved as well as the lives of many men. A shocking succession of accidents occurs, mysterious and fatal. Thugs and murderers are holding the little town in a grip of terror. Death and disaster become the rule. Only by finding the source of this ruthless sabotage can the Underwriters Alliance, financiers of the project, be saved from turning their contract over to their rivals." And their man for the job is their hard-boiled ace investigator, Rex McBride. This was the first of Adams's six novels featuring McBride, a sort of proto-Mike Hammer who's described by one critic as "hot-tempered, crude, sexist [and] racist."