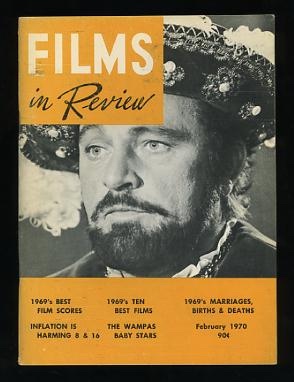 Films in Review (February 1970) [cover: Richard Burton in ANNE OF A THOUSAND DAYS]

[minor smudging/rubbing near top of front cover]. (B&W photographs) The primary item of interest in this issue is an article about the WAMPAS Baby Stars, by Roi A. Ustelton, which provides a one-paragraph summary of the career of every actress who was ever "debuted" under that banner. Also included are two recaps of the film year 1969: editor Henry Hart's reliably eclectic "Ten Best" lists (including, inexplicably, a Best Director nod to Alfred Hitchcock for TOPAZ, one of his dullest films), and a month-by-month rundown of the year's marriages, births and deaths among film personalities. Among the new films reviewed are PATTON, THE DAMNED and (there it is again) TOPAZ -- with yet another wrong-headed assessment ("I think it will endure as an example of Hitchcock at the height of his powers") by a critic who shall here remain nameless. ***We have many other issues of this publication and other film magazines, and welcome your inquiries.***

Films in Review (February 1970) [cover: Richard Burton in ANNE OF A THOUSAND DAYS]