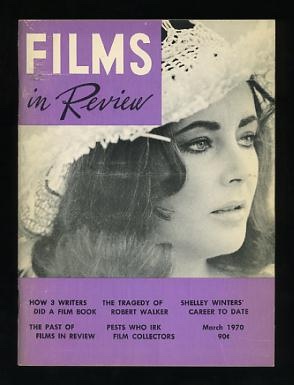 Films in Review (March 1970) [cover: Elizabeth Taylor in THE ONLY GAME IN TOWN]

[light surface wear to covers]. (B&W photographs) In this issue: career articles on Robert Walker and Shelley Winters; an article by film historian Rudy Behlmer about his collaboration with Tony Thomas and Cliff McCarty on their book "The Films of Errol Flynn"; a discussion of the work of director Sam Wanamaker (in the "Films on TV" column). Among the new films reviewed are M*A*S*H, THE MILKY WAY and ZABRISKIE POINT, all of which provide the magazine's staff of so-called critics with ample opportunities to put all their prejudices on display: Luis Bunuel's films "are so corrupt"; M*A*S*H is a "tasteless, and therefore ineffective, satire"; Antonioni is scored for his "further revelation of his infantile misconceptions about twentieth century existence [and] his less than infantile incomprehensions of US society." (And yet of George Stevens's misbegotten THE ONLY GAME IN TOWN, it's stated that "no programmer has ever been put on the screen more lucidly," and the utterly forgettable Disney film KIND OF THE GRIZZLIES is hailed as a "delightful and rewarding film." But nobody I ever knew read "Films in Review" for the film reviews, after all.) ***We have many other issues of this publication and other film magazines, and welcome your inquiries.***

Title: Films in Review (March 1970) [cover: Elizabeth Taylor in THE ONLY GAME IN TOWN]

Films in Review (March 1970) [cover: Elizabeth Taylor in THE ONLY GAME IN TOWN]