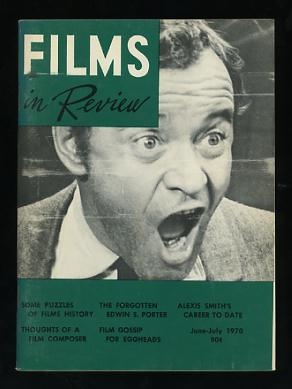 Films in Review (June-July 1970) [cover: Jack Lemmon in THE OUT-OF-TOWNERS]

[light handling wear, a touch of deterioration along spine]. (B&W photographs) In this issue: a career article on Alexis Smith; an article about the contributions to early filmmaking of Edwin S. Porter; a discussion of the work of director Robert Day (in the "Films on TV" column); several pages about the recent life and work of Bernard Herrmann (in "The Sound Track" column). New films reviewed include THE OUT-OF-TOWNERS, Sam Peckinpah's THE BALLAD OF CABLE HOGUE, and GETTING STRAIGHT.

Films in Review (June-July 1970) [cover: Jack Lemmon in THE OUT-OF-TOWNERS]