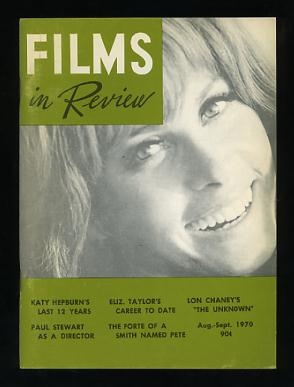 Films in Review (August-September 1970) [cover: Stefanie Powers in THE BOATNIKS]

[light external handling wear, a touch of scuffing along left edge of front cover]. (B&W photographs) In this issue: career articles on Elizabeth Taylor, MGM shorts producer Pete Smith, and Katharine Hepburn (post-1957 only); a brief discussion (in the "Films on TV" column) of the career of actor Paul Stewart. The new-film reviews include several bona fide cinematic disasters: CATCH-22, DARLING LILI, and MYRA BRECKINRIDGE. (The latter is scored as "lower than any respectable studio has hitherto gone in chasing a buck," and the reviewer even felt compelled to include an asterisked footnote to hilariously explain the term "transexualized.") And editor Hart's review of LET IT BE is one for the ages, in which he unapologetically asserts that he has "no access to circles frequented by Beatlemaniacs and so am ignorant of the events which caused the Beatles to split up." His reference to "the Japanese wife of Lennon" is charming, too.

Films in Review (August-September 1970) [cover: Stefanie Powers in THE BOATNIKS]