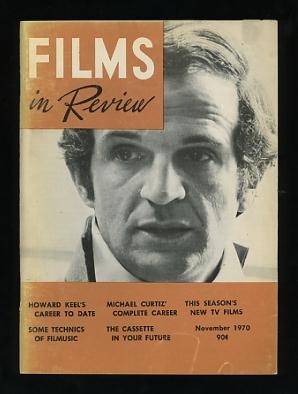 [a bit of scuffing to the front cover, slight fading along left edge (next to spine)]. (B&W photographs) In this issue: career articles on Howard Keel and director Michael Curtiz; an article about "cassettes," and how they "will revolutionize the book, movie & TV industries -- and much else"; a discussion (in "The Sound Track" column) about the importance of timing sheet, click sheets and footage charts in the creation of film music. New films reviewed include Truffaut's THE WILD CHILD, Billy Wilder's THE PRIVATE LIFE OF SHERLOCK HOLMES, and Bob Rafelson's FIVE EASY PIECES. (The latter film, predictably for this conservatively orthodox publication, is completely dumped on: "'Alienated' people in real life, no matter what they're alienated from, are a bore, and in movies they're even more so, especially in movies as inadequately written and directed as this one.")