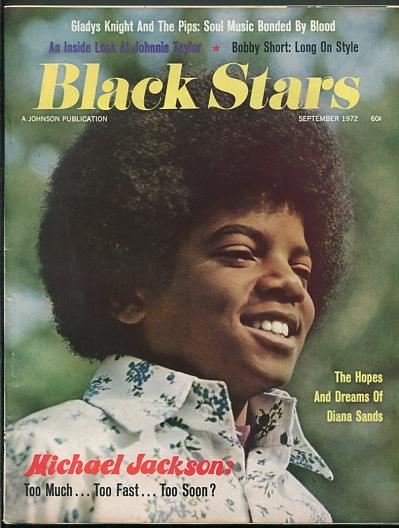 [nice clean copy, almost no visible outward wear BUT NOTE that the Michael Jackson cover story has extensive margin notes in blue ink scribbled throughout]. Vintage magazine highlighting African-American performers of the day, mostly in the music world. In addition to the cover story on then 13-year-old Michael Jackson (with its prophetic cover line: "Michael Jackson: Too Much -- Too Fast -- Too Soon?"), there also a photo feature on the family group, "The Jackson Five Visit Black Stars." Also in this issue are feature stories on Rosalind Cash, Bobby Short, Gladys Knight and the Pips, Johnnie Taylor, Stevie Wonder, Diana Sands, Luther Ingram, Jodie Drake, and Tim Pelt, and a report on a "Gospel Summit Meeting" recounting the recording of an album by Aretha Franklin and the Rev. Dr. James Cleveland. The Chicago-based Johnson Publishing Co., founded in 1941, was for many years the nation's largest black-owned publishing concern, producing (at various times) a dozen or so magazine titles, notably "Ebony" and "Jet." "Black Stars" itself had a ten-year run, from 1971 to 1981.