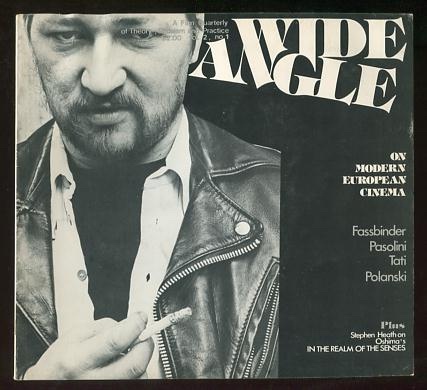 [nice clean copy, but some slight wrinkling due to apparent dampness at some point (nothing even approaching "damage," though), a little scuffing/smudging on rear cover]. (B&W photographs) The focus of this issue is on then-current European filmmakers, although there are a few deviations as well. Includes: an article on Rainer Werner Fassbinder and the theatre; an article about Alexander Kluge and other contemporary German filmmakers; an analysis of Jacques Tati's LES VACANCES DE MONSIEUR HULOT (MR. HULOT'S HOLIDAY); a discussion of Roman Polanski's "cinema of cruelty"; a translation of a 1966 article by Pier Paolo Pasolini, "The Scenario as a Structure Desiged to Become Another Structure"; an article, "The Question of [Nagisa] Oshima," discussing his film IN THE REALM OF THE SENSES; a lengthy interview with film editor Dede Allen. ***NOTE that we have many issues of this and other film-related periodicals that are not listed online, and we welcome your inquiries.