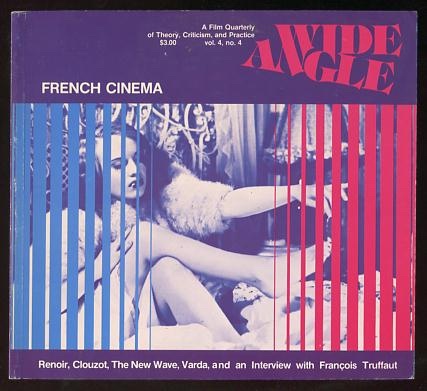 [nice clean copy, just a touch of edgewear to covers]. (B&W photographs) Articles on various topics related to French cinema, including: an analysis of Jean Renoir's BOUDU SAVED FROM DROWNING; a discussion about "French Film During the German Occupation," as reflected in the production of LE CORBEAU by Henri-Georges Clouzot; an article, "The Art of Film in France Since the 'New Wave'" (translated from Cinema d'aujourd'hui); an interview with Francois Truffaut; and a discussion of the use of music in Agnes Varda's CLEO FROM FIVE TO SEVEN. There's also an analysis of "psychoanalysis and style in John Ford's THE SEARCHERS," an interview with video critic Victor Ancona, and a couple of book reviews. ***NOTE that we have many issues of this and other film-related periodicals that are not listed online, and we welcome your inquiries.