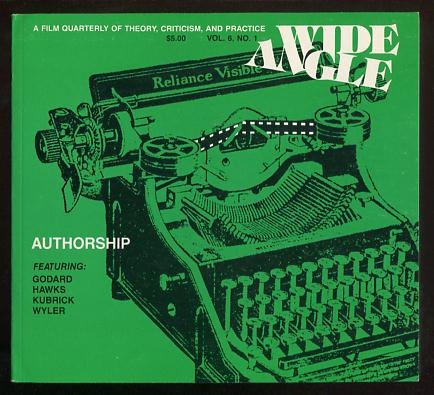 [just a touch of wear at spine ends, otherwise as new]. (B&W photographs) Includes: an article by David Bordwell about the aesthetics of the jump cut (with much reference to the work of Jean-Luc Godard); a discussion of THE CABINET OF DR. CALIGARI (1919) as an exemplar of the "art cinema"; an attempt to parse out the "authorship" of COME AND GET IT (1936), the direction of which was split between Howard Hawks and William Wyler; an analysis of THE LADY IN THE LAKE (1946), based on the Raymond Chandler novel; "The One Woman," an excruciatingly detailed discourse on the psycho-sexual-aesthetic significance of the scene in Kubrick's DR. STRANGELOVE between General Buck Turgidson (George C. Scott) and his secretary, "Miss Scott" (the only scene featuring a woman in the entire film); an interview with filmmaker Manny Kirchheimer; an interview with videomaker Judith Barry on the topic of "Video Art and Video Games"; and reviews of books about film theory, Japanese cinema, Robert Altman, and Jacques Tati. ***NOTE that we have many issues of this and other film-related periodicals that are not listed online, and we welcome your inquiries.