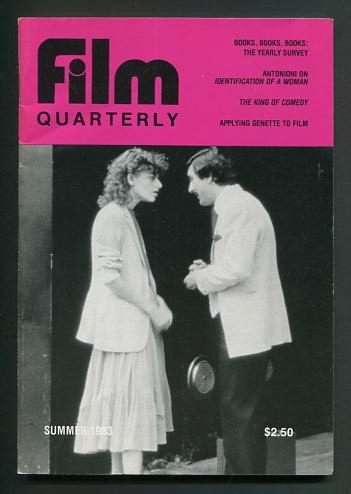 [nice clean copy, minor wrinkling to front cover]. (B&W photographs) In this issue: an interview with Michelangelo Antonioni; an article by film theoretician Brian Henderson, "Tense, Mood and Voice in Film (Notes After Genette)"; an in-depth review of Martin Scorsese's THE KING OF COMEDY; a long review of Charles Musser's book "Before the Nickelodeon: The Early Cinema of Edwin Porter"; the first part of a special feature on the year's film books (covering autobiographies/biographies, criticism, director studies, genre studies, and history; continued in the next issue) ***NOTE that we have many issues of this and other film-related periodicals that are not listed online, and we welcome your inquiries.