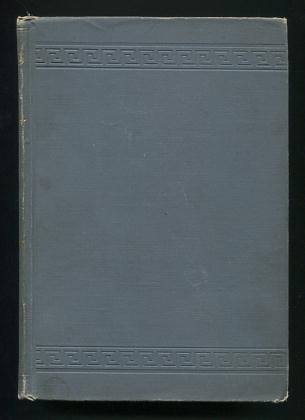 Instead of a Book, by A Man Too Busy to Write One: A Fragmentary Exposition of Philosophical Anarchism

By: Tucker, Benj[amin] R. (culled from the writings of)

(no dust jacket) [moderate wear to edges and extremities, slight exposure of boards at lower corners, previous owner's stamp and another previous owner's signature on ffep (the two sharing a last name, probably a father and son; see notes)]. (B&W photo frontispiece of the author) Primarily an anthology of writings (articles, essays, letters to the editor) from the publication "Liberty," founded in 1881 by Tucker and published by him until 1908. Per scholar Wendy McElroy, it's "widely considered to be the finest individualist-anarchist periodical ever issued in the English language," and (per Wikipedia) "was instrumental in developing and formalizing the individualist anarchist philosophy through publishing essays and serving as a format for debate." The writings of Tucker (1854-1939), an anarchist and socialist, (again quoting Wikipedia) "contributed to the development of both left-libertarian and right-libertarian political theory in the United States and were often reprinted in early libertarian journals." The book opens with an essay, "State Socialism and Anarchism: How Far They Agree and Wherein They Differ"; the remainder of its contents are organized under the following headings: The Individual, Society, and the State; Money and Interest; Land and Rent; Socialism; Communism; Methods; and Miscellaneous. 512 pages, including the Index, plus two pages of advertisements in the back: one for "Liberty" itself ('The Pioneer Organ of Anarchism in America"; subscription two dollars a year), the other a list of a dozen works of "Anarchistic Literature" that could be mail-ordered from Mr. Tucker. The book was published in London in 1895 and Tucker himself issued a second edition in 1897, but this 1893 printing was the first; library holdings are plentiful enough, per OCLC, but quite scarce in commerce. The ownership stamp on the ffep is that of Frank E. Hartung, a long-serving (1942-1978) professor of sociology at Wayne State University; the signature, just beneath it, is of Dr. Urban L. Hartung, Sr., presumably Prof. Hartung's father.

Title: Instead of a Book, by A Man Too Busy to Write One: A Fragmentary Exposition of Philosophical Anarchism

Author: Tucker, Benj[amin] R. (culled from the writings of)

Instead of a Book, by A Man Too Busy to Write One: A Fragmentary Exposition of Philosophical Anarchism