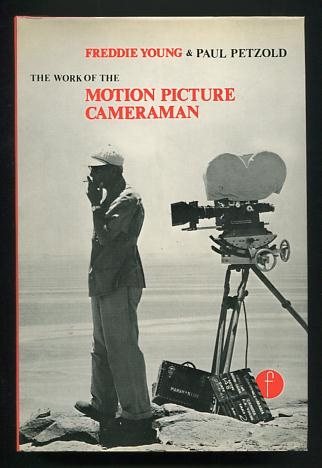 The Work of the Motion Picture Cameraman

By: Young, Freddie, and Paul Petzold

[minimal shelfwear, but some light foxing on all edges of the text block; jacket is flawless except for some uneven fading to the spine]. (B&W photographs, diagrams) This "first comprehensive work by one of the world's greatest film cameramen will serve as an authoritative source of information on camera technique in large scale feature productions." Define "large scale," you say? Well, you could start with LAWRENCE OF ARABIA, which Mr. Young shot for David Lean just before commencing the series of interviews that formed the basis for this book, which "took place over a period of seven years, as they were continually interrupted by the demands of Freddie Young's film commitments" -- other little pictures like DOCTOR ZHIVAGO, BATTLE OF BRITAIN, RYAN'S DAUGHTER, and NICHOLAS AND ALEXANDRA. The book's text is organized in ten sections: The Film Makers; Cameras and Lenses; Lighting and Other Equipment; The Film--Preliminaries; Lighting Objectives and Procedure; Lighting for Situations and Effects; Camera Techniques; Filming Studio and Location Effects; Working with Artificial Backgrounds; Marine Sequences. The Preface is by producer Michael Balcon, who notes that even though he'd then been working in the film business for fifty years, Young had been at it longer still, having started working in the Gaumont laboratory at Lime Grove, Shepherds Bush, at the age of fifteen -- and he had a few years yet to go, notching his final feature film credit on the 1985 comedy INVITATION TO THE WEDDING. This book is the perfect companion piece to Young's posthumously-published autobiography, "Seventy Light Years: A Life in the Movies" -- the two books even use the same cover photo!

Title: The Work of the Motion Picture Cameraman

The Work of the Motion Picture Cameraman