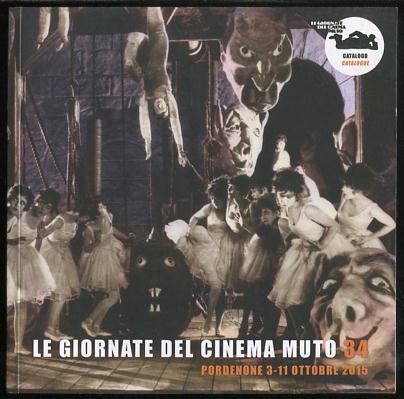 [nice tight clean copy, with no discernible wear]. (B&W and color photographs) Program book for the 34th Pordenone Silent Film Festival, an annual celebration of the international silent cinema. Among this edition's highlights were programs devoted to director Victor Fleming, African-American actor/comedian Bert Williams, the beginnings of the Western film, Russian silent comedies, Latin American silent cinema (in Argentina, Bolivia and Mexico), and (as at all good film festivals) many, many more. A few of the notable films screened during the festival were: THE PHANTOM OF THE OPERA (1925); THE BATTLE OF THE CENTURY (a 1927 Laurel & Hardy comedy, the legendary and long-thought-lost epic pie fight sequence of which had only recently been rediscovered and restored); the 1926 French film LES MISERABLES; two early Douglas Fairbanks features, WHEN THE CLOUDS ROLL BY (1919) and THE MOLLYCODDLE (1920); MANTRAP (1926) and WOLF SONG (1929), part of the Victor Fleming program; SHERLOCK HOLMES (1916); and SHOW GIRL (1928). All program notes for the individual films are in both Italian and English.