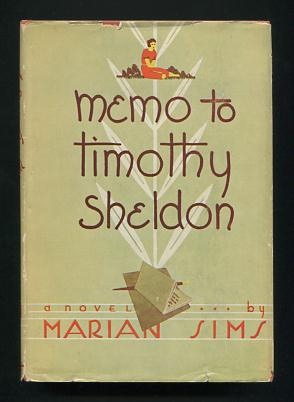 [good solid book with only minor shelfwear; jacket has a few tiny edge-nicks, very shallow paper loss at spine ends]. Novel "presented in the form of a long letter, written over a period of time by Lynn Sheldon to her husband" -- basically to confess and explain how she's fallen in love with "an attractive young professor of English [who] recognizes her capacity for vital living." (Which hubby Timothy -- "a substantial business man [who] loved fishing, golf, the sea -- and people" -- apparently didn't fully appreciate, even though the marriage was in many ways quite satisfactory.) Georgia-born but living and writing mostly in North Carolina, Mrs. Sims (1899-1961) wrote a lot of magazine fiction, but also turned out seven novels between 1934 and 1946; unlike many Southern novelists of the period her focus was not on the hardscrabble rural/agrarian life, but rather the politics, social conflicts and personal crises of the upper- and middle-class urban South. The New York Times critic pronounced it "a finished and admirable job, pleasant and rewarding," particularly noting that its characters' "problems are treated with notable honesty and intelligence."