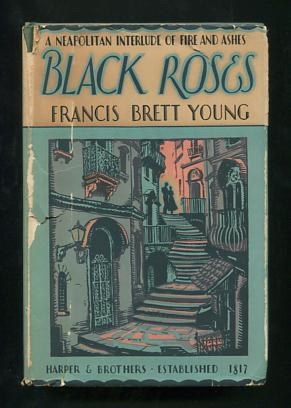 [solid, clean copy, light shelfwear, modest bumping to lower corners; jacket is edgeworn, especially along spine, with small tears and minor paper loss at several corners, and a somewhat ragged tear along the left edge of the front panel]. Hard to top this jacket blurb: "The hot blood of a Neapolitan peasant coursed in his veins, and from his father, eccentric expatriate Englishman, he inherited the cold idealism that tempered his artistic nature. He was a curious paradox, this man -- brought up on English classics and French pornography, and thrashed with a dried cow's tail when he tried to paint. But when his dreams of being an artist still persisted he went to Naples, lived in a scabrous palace and earned a precarious livelihood by faking Florentine parchment covered boxes. In that same palace Paul discovered the exalted singing love that was to be the romance of his life, a love that neither jealousy, plague nor death could quench. The love story of Paul and Cristina, shining out from the sombre shadows of squalor, crime and violence, is a triumpoh of the author's emotional and artistic skill, a striking cameo cut from the depths and fire of passion." Phew! A note on this book posted on the website of the Francis Brett Young Society (yes, Registered Charity No. 1075904) states that this novel's "story is based on a Naples cholera epidemic remembered by [the author's] Capri neighbour, Edwin Cerio, whilst Paul Ritchie may well have been based on another Capri resident, D.H. Lawrence" (which honestly seems a bit of a stretch). Also published in the U.K. by Heinemann, at almost the same time; the earliest notices I've found for it were in Sepember 1929. (H-D in Harper's parlance translates to August 1929, and it's also a stated "First Edition.")