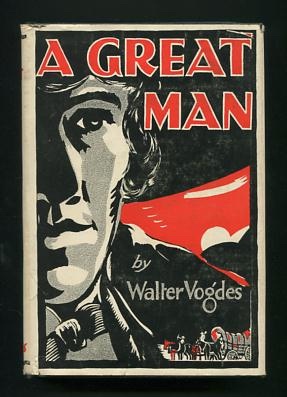 [a tight clean copy, with no discernible wear; jacket has one itsy-bitsy nick at base of spine, tiny tears at upper corners]. The title character of this historical novel is a "dark and glowing giant who typifies success [and] lands in the City during the gold rush of '49 -- to buy the land, get the gold, corner the food, incide and, finally, master the mob." The City is of course San Francisco; I can only assume that the author's choice never to refer to it by name has something to do with making his Great Man a sort of archetypal, larger-than-life figure, partly by means of de-emphasizing the geographical specificity of his milieu. Vogdes (1894?-1935) had been a newspaperman on both the West Coast and in New York for more than a decade, but this was his only published book; he later became an associate editor for King Features Syndicate, then (shortly before his death) the editor of "True Detective Mysteries" magazine. He died of a heart attack at the age of 41, and suffered the posthumous indignity of having his name misspelled as "Vodges" by the AP. (The AP also reported that he had written under the names "Nigel Trast" and "Hubert Dale," but I question that information too: a "Nigel Trask" shows up in the FictionMags Index, but with only two stories to his credit, both published in 1940, five years after Vogdes's death, and I find no trade of a writer named "Hubert Dale" anywhere.)