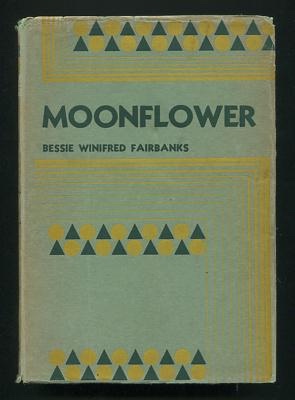 [light wear to extremities, pages somewhat age-toned; jacket somewhat browned and slightly mottled along spine, a bit of paper loss at top of spine and upper corners, a couple of tiny tears at base of spine]. The author's first (and apparently only) novel, a "desert story" set in the American Southwest. There's not much geographical specificity, and although some early action in the book takes place in Needles, California, the presence of a number of Navajo characters in the book is more suggestive of an Arizona or New Mexico locale. (There is constant reference throughout the book to "the valley," which is never named, but which is apparently not Death Valley.) The jacket blurb states that the author "lives in Gardner, Massachusetts, where this novel was written. Mrs. Fairbanks is the author of many published stories, but this is her first novel which, we believe, presents her work at its best. We are happy to state that a new book by Mrs. Fairbanks is now being prepared for publication soon." That book seems to have never appeared, and in terms of those "many published stories," I've only been able to turn up one, entitled "True Love Wins," in a 1930 issue of Love Story Magazine. Very uncommon: OCLC records only three copies. The publisher, Robin Wilder and Company, seems to have been as short-lived as Mrs. Fairbanks's literary career; in fact, this book is the *only* title from that company that turns up on OCLC.