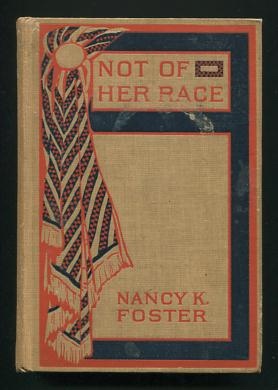 Not of Her Race

(no dust jacket) [a little bit of surface deterioration to covers, light external soiling, spine cloth a little darkened, spine slightly turned, old gift inscription (non-authorial) on ffep]. (B&W photo frontispiece) Miscegenation-themed novel, set in Southern California and Northwestern Mexico. Although the cynical reviewer of the book for the Los Angeles Times (after denigrating the author as "a lady psychologist") stated that "the chief business of the book is to show how impossible it is for Ruth Hastings, a cultured and educated Bostonian young lady, to marry Estaban Ybarrando, a Mexican," that in fact is a gross distortion of both its plot and its point. (But just so we don't put too much stock in his opinion, the same reviewer expressed his "disappointment" that Estaban "developed into a virtuoso of patience and longer suffering devotion" -- because he (the reviewer), upon first seeing the character's name, was "immediately prepared for stilettos, vengeance, midnight murders and other interesting affairs." Not much prejudice there, eh?) The book's action takes place in both California and Mexico, with a major story element involving a bubonic plague outbreak in a mining community in the state of Sonora -- a crisis which, without going into too much detail, ultimately results in a transfer of Ruth's affections from her somewhat boorish fiancé, a mining magnate, to Estaban. (Who, by the way, is a thoroughly Americanized "Mexican," and in the words of a more sympathetic reviewer, "courtly, handsome, chivalrous, the very beau ideal of [Ruth's] dreams" -- even though it takes her until the final moments of the book to fully embrace the idea.) Hanna 1288; overlooked by Baird & Greenwood.

Title: Not of Her Race

Not of Her Race