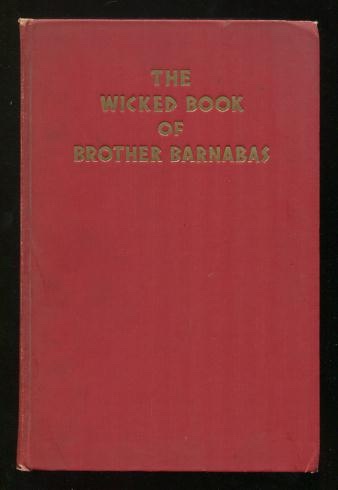 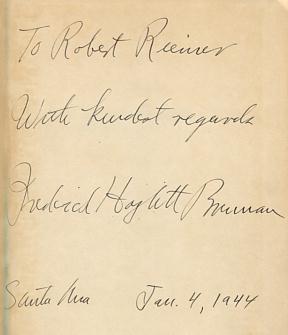 (no dust jacket) [moderately shelfworn copy, with numerous abrasions to cloth along top and bottom edges of both covers, some wear at spine ends, modest bumping at all corners, some discoloration in gutters]. INSCRIBED and SIGNED by the author on the ffep: "To Robert Rainer[?] / With kindest regards / Frederick Hazlitt Brennan / Santa Ana, Jan. 4, 1944." One of the odder novels you'll ever run across -- as one contemporary reviewer described it, "a singularly unclassifiable mixture of whimsey, dullness, vulgarity and illuminating thought." It's kind of a fantasy-satire in which the title character, a Big Thinker, expounds at great length upon his plan to establish an experimental educational institution (rather ominously dubbed "The Laboratory"), the purpose of which would be to teach people (particularly children) to love their country, through a program of lectures, thought experiments, and entertainments. Brother Barnabas has holed himself up in a poorhouse in order to hatch his scheme, which he hopes to persuade a rich acquaintance to bankroll to the tune of ten million dollars. Another critic of the day praised it as some of "the most exciting social sermonizing that you will read in many a dreary year," and opined that "you are as dead as John Marshall if you do not thrill to the blasting, dynamic, fire-spitting challenge of brave Brother Barnabas, who thinks that Americans should be taught to love their country even if they need strip-teasers and Mickey Mouse pictures to coax them to it." Apparently the idea behind Brennan's publishing the book pseudonymously was so that his own reputation (primarily as a prolific author of magazine fiction and sometime-screenwriter) wouldn't get in the way of his Big Ideas about what was ailing modern American society and how to fix it. (In any event, however, the anonymity had a short shelf-life: the book was published in April 1940, and by early July he'd already been outed as its author by (who else?) Walter Winchell.) There was a little flurry of gossip-column items that July, in fact, claiming that the book was "a sensation in Hollywood," and that a movie version was in the offing -- backed by "top democrats" in one telling; possibly to star Raymond Massey, in another -- but no such film ever materialized. Signed-by-the-author copies are, for understandable reasons, uncommon. Signed by Author