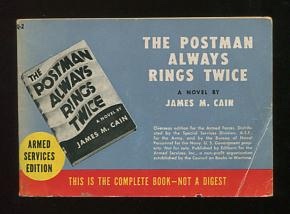 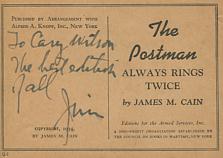 [moderately worn copy, slght fading along spine, short diagonal crease at bottom corner of front cover; internally quite clean, with typical signs of aging to cheap paper]. An outstanding association copy of Cain's most famous novel, INSCRIBED and SIGNED by the author on the title page -- an amusing inscription to film producer and fellow screenwriter Carey Wilson which reads: "To Cary [sic] Wilson / The best edition / of all / Jim." Wilson was the producer of the long-delayed MGM film version of the book, released in 1946, and in fact had been the first writer assigned to the property when MGM resuscitated it in 1944 (having owned the rights for several years but been put off by the censorship challenges), although the screenplay credit on the finished film was shared by Harry Ruskin and Niven Busch. The inscription is undated, but almost certainly dates from the period when the pair were working together on this and another project, "The Common Sin," which never came to fruition. According to Cain biographer Roy Hoopes, Wilson once told Cain that he admired the author's fiction for his believable characters and the interesting situations he put them in: "After all, how much do I care about a goddamn hobo and a waitress out there in that place you put them in your first novel? But for chrissake, I couldn't put it down for two hours when I read that book." Quite apart from the important association, it should be pointed out that ANY signed-by-the-author Armed Services Editions are exceedingly scarce, for the simple fact that most of them rarely ended up anywhere near their authors, having been produced expressly for the reading diversion of American soldiers during World War II. In fact, I've done an extensive online search and have found exactly -- none. Signed by Author