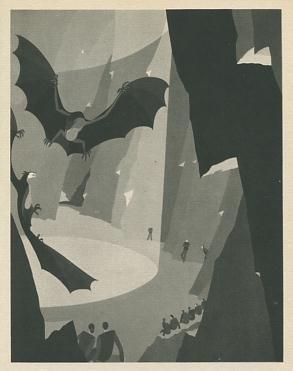 Ultimo; an imaginative narration of life under the earth

[some wear to cloth at ends of spine, very slight bump to bottom front corner; fragile jacket is quite presentable, worn along edges and hinges, hinges split along several lengths but still holding together, about 1" paper loss from top of spine (no loss of text), tiny chip at bottom left corner of rear panel, a few little nicks along top of front panel]. (B&W plates) A memorandum from an imagined future time, in which centuries of slow-moving but cataclysmic climate change -- not global warming but rather global freezing -- have forced humans first to reconstitute their civilization far beneath the surface of the earth, and ultimately to develop "projectile cars" (rocket ships, essentially) to allow them to escape from an earth that's become "useless and dead." (The memo-writer has rejected an alternate plan to use "certain experiments in atomic detonation"(!) to shift the earth's orbit closer to the sun, and to thereby re-heat the planet.) Although primarily known for his influential work in the field of industrial design, his credentials as a modernist artist were firmly established by the three books he published around this time; this one was preceded by "Contempo" (1929) and followed by "Phobia" (1931). The book's dedication is "To D.H.L. [D.H. Lawrence] who loved the sun"; Lawrence had died in March 1930 (the book was published in November). And don't miss the attractive black-on-silver bookplate (concealed by the front jacket flap) of one A. Eric Armstrong, on whose shelves this book once rested.

Title: Ultimo; an imaginative narration of life under the earth

Ultimo; an imaginative narration of life under the earth