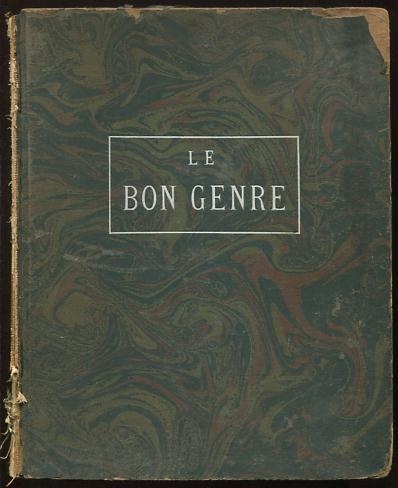 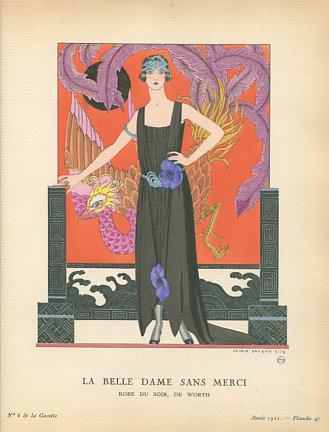 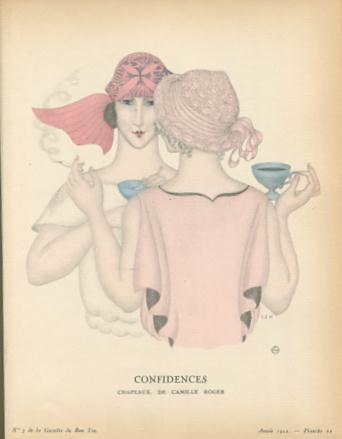 (marbled boards and endpapers; no dust jacket) [externally a mess, the spine covering completely gone, the front cover just hanging on by a thread, heavy wear to edges of boards, etc.; internally, however, in quite decent shape, the only real problem being a dampstain along the bottom edge that affects a number of the plates, although in many cases very lightly, and in NO instances does the stain extend anywhere near the actual illustrations, which are all bright and attractive]. (color pochoir plates) A collection of what appears to be randomly-selected pochoir plates from issues of the periodical "Gazette du Bon Genre," published in Paris from 1920 to 1922. (It had first appeared in 1912, but its publication was suspended during World War I. Some sources have described it as an "American edition" of "Gazette du Bon Ton.") It represents a fashion/style world that was still finding its way after the severe disruption wrought by the war, with the Art Nouveau movement largely exhausted and the Art Deco style still in the ascendant. Among the prominent designers whose work is depicted in these plates are Paul Poiret, Jean-Charles Worth, Gustave Beer, Jeanne Lanvin, Camille Roger, Georges Doeuillet, Martial et Armand, and others. Most of the illustrations are of beautiful and fabulously-dressed women in a variety of settings (at the opera, strolling some boulevard, admiring themselves in the mirror, etc.), although there's an occasional cameo appearance by an equally-well- (but not quite as fabulously-) dressed man, and even a few children and animals, but they're pretty much playing supporting roles to whatever business the women are up to. The illustrators credited on the title page are: George Barbier, Eduardo Benito, Robert Bonfils, Pierre Brissaud, Jean-Gabriel Domergue, Etienne Drian, Alexandre Iacovleff, Georges Lepape, Charles Martin, André-Édouard Marty, Siméon, Thayaht (Ernesto Michahelles), and "etc." The plates are individually tipped in to the volume (not bound in), and there's no apparent rhyme or reason to their order; most are identified as to their original publication issue and date, e.g. "No. 7 de la Gazette / Annee 1921 -- Planche 53." Apart from the title page (in English, although the book was "Printed in France"), there is no text other than the identifying title/designer/publication information on the individual plates (in French). I suspect, given the manner of their assembly and presentation, the fact that the "Gazette" had ceased publication, and the Brentano's imprint (it not being the firm involved in publishing the "Gazette" itself), that this volume represented somebody's bright idea to make good use of unsold copies of the magazine by cannibalizing them for the plates. The volume is relatively uncommon: OCLC identifies just eight library copies in the U.S. and one in Canada (although it's entirely possible, unless they've been carefully guarded over the years, that not all of those are still complete); copies do occasionally come up for auction, most recently in 2017. I can envision two potential futures for this particular volume, which is complete in spite of its state of ill use: (a) it's valuable enough, and in good enough shape internally, to justify a nice re-binding job; or (b) it could become a "breaker," i.e. the prints could be easily removed for framing or individual resale purposes. I will leave this choice to the determination and discretion of the buyer, with no judgment implied or intended.