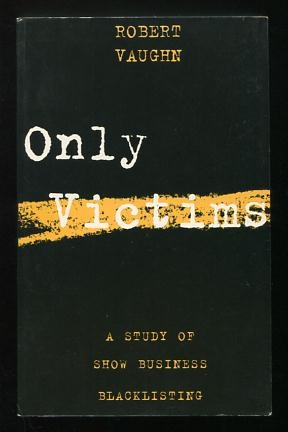 Only Victims: A Study of Show Business Blacklisting [*SIGNED*]

[nice clean copy, with just a touch of wear to lower edge of front cover]. Trade PB INSCRIBED and SIGNED by the author on the ffep in 1997: "To Vincent [Sherman], / With All Good / Wishes that 'it / can't happen / here again.' / Merry Xmas / Robert Vaughn." .This deeply-researched study of blacklisting in the entertainment business (covering not just the movies but also theatre, radio and television) was first written as a Ph.D. thesis at the University of Southern California by the noted actor, best remembered as "The Man from U.N.C.L.E.", Napoleon Solo. Incorporating interviews and correspondence with people who provided "new primary evidence," it was the most comprehensive analysis of its subject that had been published at that time, and was an important work in the modern mythologizing of the Hollywood Ten (including Dalton Trumbo, from whose notorious "only victims" statement Vaughn took his title). Foreword by Senator George McGovern. Signed by Author

Title: Only Victims: A Study of Show Business Blacklisting [*SIGNED*]

Only Victims: A Study of Show Business Blacklisting [*SIGNED*]