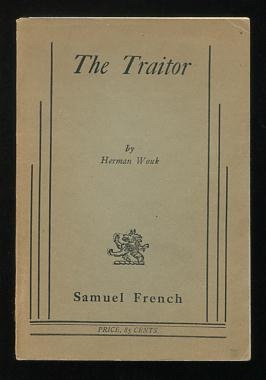 The Traitor; a play in two acts

[front cover just starting to pull loose a little, and a couple of pages seem to have been slightly mis-aligned with the book was bound; about a one-inch split in binding at bottom front hinge, with a bit of the spine covering missing there as well]. (B&W photo frontispiece, stage diagrams) Serviceable copy of Wouk's first play, a spy melodrama, uncommon in any printing. Originally staged on Broadway in 1949, with a cast that included Lee Tracy, Walter Hampden, and Wesley Addy, it was followed shortly by his breakthrough novel, "The Caine Mutiny" (1951) and its 1953 stage adaptation and subsequent movie.

Title: The Traitor; a play in two acts

The Traitor; a play in two acts