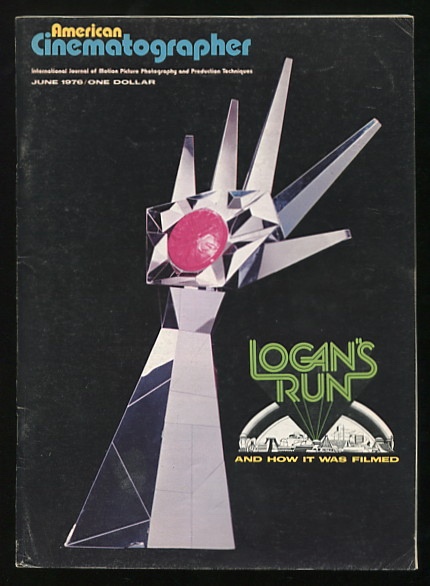 [covers lightly rubbed, minor bends at corners of front cover]. (B&W & color photographs, ads) Monthly magazine of the American Society of Cinematographers, a very technically-oriented publication with plenty of information (articles and advertisements) related to the latest equipment, technical processes and production techniques then in use in the Hollywood motion picture industry. A substantial part of this issue is devoted to the production of the film LOGAN'S RUN, with the magazine's usual "behind the scenes" feature accompanied by interviews with cinematographer Ernest Laszlo, producer Saul David, production designer Dale Hennesy, and special effects man Glen Robinson, plus an additional article specifically about the use of holograms in the film (purportedly the first time this had been done); all these features are profusely illustrated. Also in this issue: a report on Filmex '76 (the Los Angeles International Film Exposition); a report on the proposed new "Trilent-35 System"; and an article about the then newly-established California Motion Picture Development Council. (We have numerous other issues of this and other film-related periodicals that are not listed online; please inquire if you have particular needs or wants.)