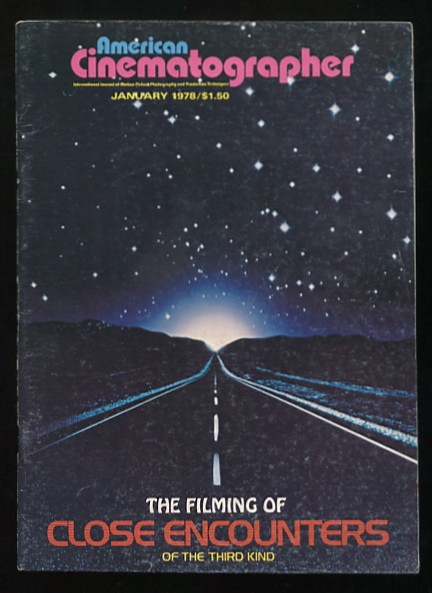 [covers moderately rubbed, a bit of scarring and paper remnants on rear cover (probably from removal of subscriber's mailing label), light soiling to rear cover]. (B&W & color photographs, ads) Monthly magazine of the American Society of Cinematographers, a very technically-oriented publication with plenty of information (articles and advertisements) related to the latest equipment, technical processes and production techniques then in use in the Hollywood motion picture industry. Virtually the entirety of this issue is devoted to the production of the film CLOSE ENCOUNTERS OF THE THIRD KIND, with the magazine's usual "behind the scenes" feature accompanied by articles by cinematographer Vilmos Zsigmond, production designer Joe Alves, supervising sound editor Frank Warner, producers Julia and Michael Phillips, director Steven Spielberg (writing about the production's "unsung heroes"), visual effects supervisor Douglas Trumbull. There's also a lengthy interview with Spielberg, and all of this material is of course profusely illustrated. One of the more sought-after and collectable issues of A.C. (We have numerous other issues of this and other film-related periodicals that are not listed online; please inquire if you have particular needs or wants.)