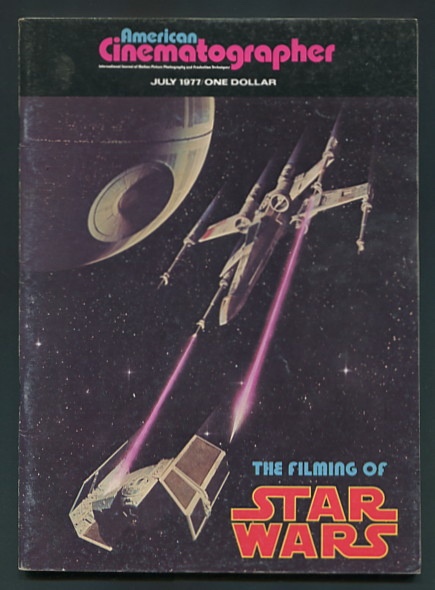 [covers lightly rubbed, a bit of wear along spine, minor scarring/remnants from removed subscription label on rear cover, which is also lightly soiled]. (B&W & color photographs, ads) Monthly magazine of the American Society of Cinematographers, a very technically-oriented publication with plenty of information (articles and advertisements) related to the latest equipment, technical processes and production techniques then in use in the Hollywood motion picture industry. This is one of the most sought-after and collectable issues of A.C., due to the substantial content devoted to the production of STAR WARS: in addition to the magazine's usual behind-the-scenes look at the shooting of the film, there are additional articles on its miniature and mechanical special effects (by John Dykstra), its composite and optical photographic effects (by Robert Blalack and Paul Roth), and the use of the Dolby sound system for recording the film (by Ioan Allen); all of these features are profusely illustrated. Also in this issue: an additional "filming of" article about MACARTHUR, incorporating an interview with cinematographer Mario Tosi; Part 2 of the transcript of an American Film Institute seminar with Haskell Wexler; articles on the Academy of Motion Picture Arts and Sciences' 50th anniversary, the Camera Assistant Training Program in Hollywood, and the Tenth Motion Picture Seminar of the Northwest. On the technical side, there is a report on a new type of Foley recording stage (and if you have to ask what a Foley stage is, you probably won't be interested in this). (We have numerous other issues of this and other film-related periodicals that are not listed online; please inquire if you have particular needs or wants.) [Bibliographical note: although it's stated on the contents page that this is Volume 58, No. 6, it is, in fact, Volume 58, No. 7 -- A.C. having hewed quite religiously to its monthly January-to-December, issues 1-12 publication schedule since its earliest days.]