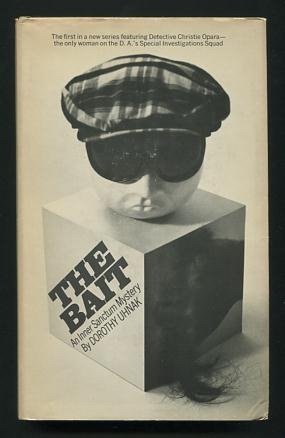 The Bait; an Inner Sanctum Mystery

[bumping to lower corners, no other significant wear; jacket has just one tiny nick at top of rear panel, slight wrinkling to match lower-corner bumps]. "The first in a series of suspense novels about the only woman on the D.A.'s Special Investigations Squad -- Christie Opara, Detective, Second-Grade -- and about the Squad itself, a specialized arm of the New York City Police Department." The author's first novel was an Edgar Award-winner for Best First Novel, and followed her 1964 nonfiction work, "Policewoman," derived from her own experience as a detective for the NYC Transit Police. She turned out two additional "Christie Opara" books; this one was adapted for a 1973 TV movie, as was another in the series ("The Ledger"), which in turn was spun off (with extreme liberties, including the transformation of the lead figure from a white woman to a black woman) into the single-season TV series GET CHRISTIE LOVE!

The Bait; an Inner Sanctum Mystery