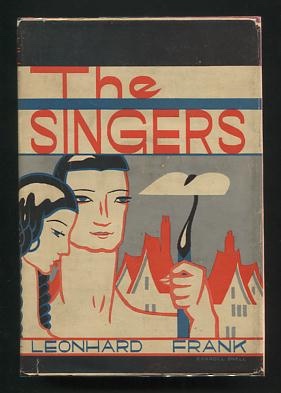 By: Frank, Leonhard (translated from the German by Cyrus Brooks)

[a nearly flawless book, but for some foxing/spotting on the top edge of the text block; jacket is lightly edgeworn, with some tiny nicks at a few corners (minimal paper loss) and one itty-bitty closed tear at the bottom of the front panel]. A mid-career ovel by this German Expressionist writer (originally published in Germany in 1927 under the title "Das Ochsenfurter Männerquartett"), about "five unemployed men with a desperate and fantastic scheme for earning a living." (This involves forming a singing group!) 1933, the year this book appeared in translation in America, was not a good one for the author: he fell afoul of the Nazis, who banned and burned his books; he fled the country, and after moving around Europe a bit ended up in the U.S. in 1940, where he remained for the next ten years before returning to Munich. (Appropriately, while in America he picked up a nice bit of movie money when M-G-M filmed his most famous novel, "Karl und Anna," in 1947 under the title DESIRE ME. "The Singers" later served as the basis for two German TV films, made a year apart -- one in West Germany (1978), the other in East Germany (1979), the former directed by Michael Verhoeven.

Author: Frank, Leonhard (translated from the German by Cyrus Brooks)