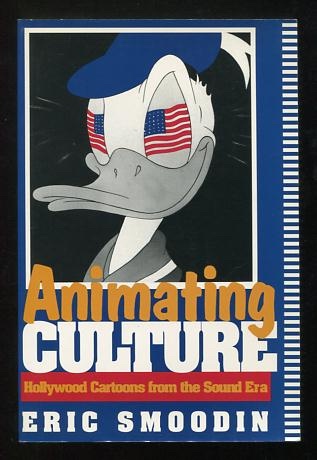 [virtually as-new, nice and clean with minimal handling wear, text clean and unmarked]. Trade PB (B&W photographs, facsimiles) A multi-faceted look at the classic Hollywood cartoons, with an emphasis on their sociocultural impact. The author "argues that carttons appealed to a wide audience -- not just children -- and did indeed contribute to public debate about political matters. He examines issues often ignored in discussions of animated film -- issues such as social control in the U.S. army's 'Private Snafu' cartoons, and sexuality and race in the 'sites' of Betty Boop's body and the cartoon harem. His analysis of the multiple discourses embedded in a variety of cartoons reveals the complex and sometimes contradictory ways that animation dealt with class relations, labor, imperialism, and censorship. His discussion of Disney and the Disney Studio's close ties with the U.S. government forces us to rethink the place of the cartoon in political and cultural life. [He] reveals the complex relationship between cartoons and the Hollywood studio system, and between cartoons and their audiences."