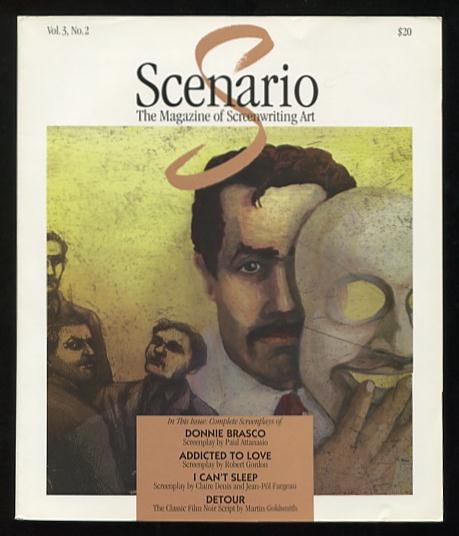 Scenario: The Magazine of Screenwriting Art (Summer 1997) [includes the screenplay for DETOUR by Martin Goldsmith]

[nice clean copy, virtually as-new with only minor handling wear]. (photographs, drawings) Per its usual format, this issue presents four complete screenplays. Three are contemporary works, and also feature interviews with their writers: DONNIE BRASCO (Paul Attanasio); I CAN'T SLEEP (Claire Denis); ADDICTED TO LOVE (Robert Gordon). Most notable, however -- and what makes this one of the most sought-after issues of this now-defunct magazine -- is the first publication of the screenplay to the great 1946 B-picture DETOUR, adapted by Martin Goldsmith from his own 1939 novel. Both the evidence of the script itself and the information in the accompanying short essay on the film's creation (along with a brief biographical sketch of Goldsmith and an excerpt from his unpublished memoirs) are a useful corrective to the usual auteurist focus on the film's director, Edgar G. Ulmer.

Title: Scenario: The Magazine of Screenwriting Art (Summer 1997) [includes the screenplay for DETOUR by Martin Goldsmith]

Scenario: The Magazine of Screenwriting Art (Summer 1997) [includes the screenplay for DETOUR by Martin Goldsmith]