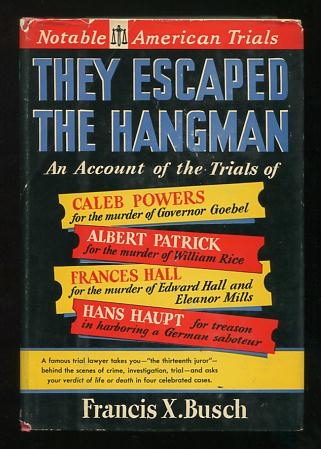 They Escaped the Hangman

[good solid copy, clean inside and out, very light bumping to corners; jacket shows a bit of wear and minor chipping at spine extremities, vertical crease in lower half of spine, one tiny hole in spne]. (Notable American Trials) Series "Nontechnical but factually accurate account[s] of four significant American criminal trials, the third book in this series. Covered are: The Trials of Caleb Powers and Others for Complicity in the Murder of Governor Goebel of Kentucky (1900-1907); The Trial of Albert T. Patrick for the Murder of William Marsh Rice (1902); The Trial of Frances S. Hall and Her Twin Brothers for the Murder of Eleanor Mills (1926); The Trials of Hans Max Haupt and Others for Treason, in Harboring a German Saboteur (1942-1944). Although all four cases were pretty big deals in their day, the one with the most widespread resonance was undoubtedly the Hall-Mills case, which is regarded as one of the biggest criminal-trial media events of the 1920s, and served as the inspiration for various novels, plays and films -- even, in the reckoning of one scholar, for notable characters in Fitzgerald's "The Great Gatsby."

Title: They Escaped the Hangman

They Escaped the Hangman