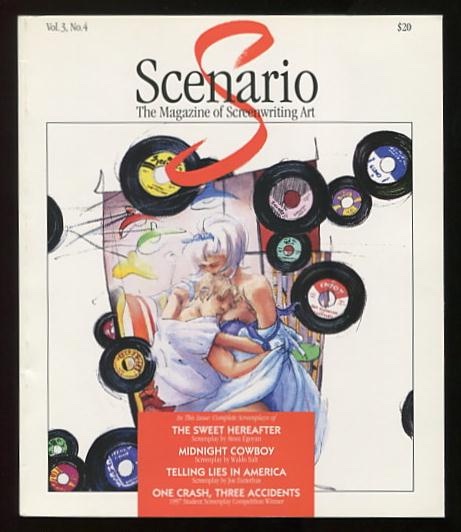 [very nice copy, tiny surface-scraping at lower left-hand corner of front cover, so inconspicuous you wouldn't have noticed it if I'da kept my big mouth shut]. Complete screenplays in this issue are: THE SWEET HEREAFTER (Atom Egoyan); MIDNIGHT COWBOY (Waldo Salt); TELLINGS LIES IN AMERICA (Joe Eszterhas); ONE CRASH, THREE ACCIDENTS (the 1997 Student Screenplay Competition winner, by Jason Greiff). Following the usual format, each script is followed by interview(s) with either the writer or other creative personnel. (In the case of MIDNIGHT COWBOY, screenwriter Salt having died in 1987, there are interviews with producer Jerome Hellman, director John Schlesinger, and the writer's daughter Jennifer Salt, plus a biography of Salt himself. For THE SWEET HEREAFTER, there is an interview with novelist Russell Banks as well as with writer/diretor Egoyan.)