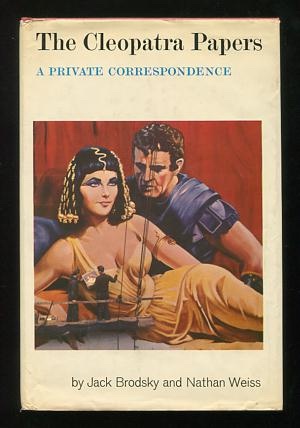 By: Brodsky, Jack, and Nathan Weiss

[minor shelfwear only to book; jacket shows just light edgewear, tiny tears at slight dog-earing to upper spine extremities]. INSCRIBED and SIGNED (in 1991) by author Brodsky on the ffep: "For Rudy -- / Without whose help / this book could never / have ben written. / Best wishes, / Jack Brodsky." A behind-the-scenes look at the major movie debacle of its day, focusing on both the production of the movie itself, "beset by spectacular production problems and a maddening plague of photographers and newsmen" following the ongoing drama of the Elizabeth Taylor-Richard Burton romance, and the backdrop of an ongoing internecine struggle for control of the producing studio, 20th Century-Fox. "When a larger-than-life phenomenon like this one occurs, it seems inevitable that a Boswell, privy to its secrets, will appear on the scene to record its glories and insanities. [This book] is by two such Boswells, one in Rome, one in New York. One was publicity manager of 20th Century-Fox throughout the shooting of the film; the other, his second in command. [The authors], close friends for years, found the official lines of communication between New York and Rome insufficient. In a storm of private letters, phone calls and cables they kept each other posted -- almost daily -- on what was really going on." The inscribee of this copy was the noted film historian Rudy Behlmer, who would make his own significant contribution to 20th Century-Fox scholarship with his 1993 book "Memo from Darryl F. Zanuck." Signed by One Author