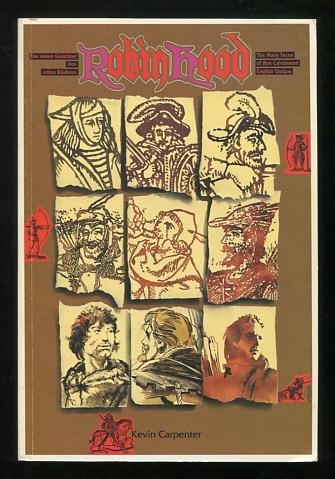 [nice clean copy, light handling wear only]. Trade PB (B&W and color illustrations) "Robin Hood has been one of the most enduring heroes of popular culture ever since his deeds were first celebrated in medieval English ballads. The steady flow of books and films about this 'noble outlaw' in recent years demonstrates the legend's continuing appeal throughout the world and its astonishing amenability to fresh interpretation. The first part of this book is a collection of fourteen essays examining the legend from a variety of angles. The second part consists of the catalogue of a touring exhibition to be shown in six European countries in 1995-97." The essays are in both German and English (some in both, or a mixture, but not a perfect one-to-one correlation, i.e. not everything that's in German is also presented in English, and vice versa); however, the descriptive caption material related to the exhibition is consistently in both German and English for all items.