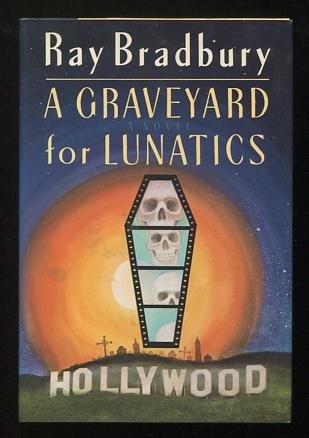 A Graveyard for Lunatics [*SIGNED*]

[very nice copy, no discernible wear to either book or jacket]. INSCRIBED and SIGNED by the author on the front endpaper: "For / Anne & Delbert / with admiration / & affection / over the years! / from / Ray Bradbury / 3/20/91." Bradbury's Hollywood novel, whose narrator "has just been hired as a sci-fi film writer at one of the great studios," where he discovers a bizarre mystery connected to a graveyard that's "separated from the studio by a single wall" -- a perfect description of the Paramount lot, although I don't believe Bradbury himself ever worked there (at least not during the 1950s, when this novel is set). (The inscribees of this copy were film director Delbert Mann and his wife.) Signed by Author

Title: A Graveyard for Lunatics [*SIGNED*]

A Graveyard for Lunatics [*SIGNED*]