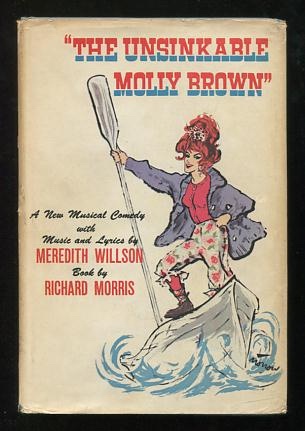 By: Willson, Meredith (music and lyrics), and Richard Morris (book)

[agency name rubber-stamped on both pastedowns, otherwise a nice clean book with minimal shelfwear; jacket browned along spine and a little bit at the edges, tiny tears at a couple of corners]. Musical play "based on the story of the illiterate girl from Hannibal, Missouri, who married Leadville Johnny Brown, a gangling Irish prospector and discoverer of one of the richest silver mines in Colorado," and her ambition to be accepted by Denver society, which leads her to a successful effort to establish herself as a presence in Paris, whereupon she heads back to rejoin her husband in Colorado. Unfortunately her return trip is on the Titanic, the disastrous sinking of which she survives, hence becoming known forevermore as "unsinkable." The original 1960 Broadway production starred Tammy Grimes, who won a Tony Award and toured with the play for a couple of years, but was supplanted for the 1964 film version by Debbie Reynolds; Harve Presnell, as Molly's husband, appeared in both the original play and the movie, which was pretty much the high point of both his stage and film career, although he had a pretty decent late-in-life run as a grizzled character actor. NOTE that in the typical fashion of published musical plays, the text of this volume contains the song lyrics but not the music.