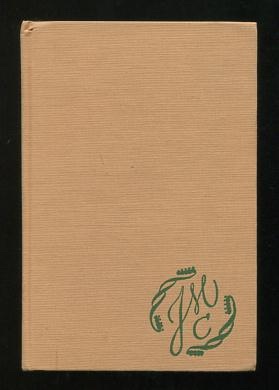 (no dust jacket) [a nice clean copy with only minimal handling wear, one-time owner's name and address written on front pastedown]. Good hard-boiled Cain stuff: "It is the story of a farmer, and of the daughter who came back to him years after he had almost forgotten her, and of the wife who had deserted him, and of the man who had stolen his wife. It is, inevitably, swiftly paced, suffused with passion, knife-like in its descriptive power." [Quoted from the dust jacket blurb, although this particular copy is jacketless.] It's also another marker on Cain's low slow slide into near self-parody, a good read but one that gives you the feeling you've been over this ground before. Almost as interesting as the novel itself is the author's somewhat cranky 13-page preface, in which he not only discusses the genesis of this particular story, but also issues various disclaimers ("I belong to no school, hard-boiled or otherwise") and devotes a good deal of time to debunking the idea that he was influenced in any way by Ernest Hemingway (he says he's 6 years and 21 days older than E.H., for one thing, and also that he'd "done a mountain of writing, in newspapers and magazines, including dialogue sketches, short stories, and one performed play, before [Hemingway] appeared on the scene at all"). So there! He also has some choice words to say about his experiences in Hollywood, including taking issue with "Eastern critics" who claimed that he had been "eaten alive by pictures." Speaking of which, decades later this very book WAS eaten alive by Hollywood, and burped up as BUTTERFLY (1982), starring Pia Zadora, Stacy Keach, and (oh dear) Orson Welles.