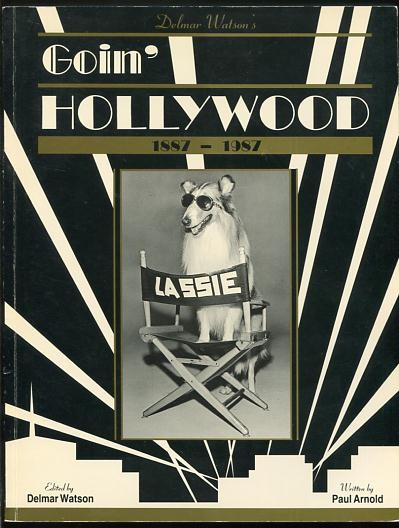 [minor wear to edges of covers and along spine, thin horizontal scratch line on rear cover]. Trade PB (B&W photographs) SIGNED by Delmar Watson on the title page. Watson grew up in Hollywood: his father was an actor, and he and his brothers were one of the best-known kid thespian clans during the Thirties and Forties. (The Watsons played four of Governor "Happy" Hopper's kids in the memorable dinner-table scene in MR. SMITH GOES TO WASHINGTON, for instance.) Once his acting days had passed, Delmar took up photography and became one of the town's most prominent lensmen. Although this book does not use his photos exclusively, it does present a nice mix of on- and off-camera shots of the stars, scenes around Hollywood, etc., many of them unfamiliar, interspersed with the author's reminiscences. Sections are devoted to Mary Pickford, Mabel Normand, Tom Mix, Shirley Temple and Jackie Coogan, along with such topics as "Hollywood Families" and "Blondes." Signed by Editor