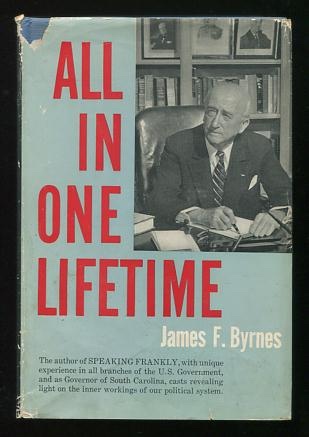 All in One Lifetime [*SIGNED*]

(price-clipped) [nice solid clean copy with no significant wear; jacket shows wear at extremities (most pronounced at spine ends and along rear hinge), and has a fingernail-size chip at upper left corner of front panel, a number of scuff marks on spine]. SIGNED by the author on the front endpaper. "[William Howard] Taft was President when South Carolina first sent young James F. Byrnes to Washington as its junio Congressman, Truman was President when Mr. Byrnes resigned as Secretary of State and then became Governor of South Carolina. In the nearly fifty action-filled years between lay an extraordinarily varied and important public career which took him to with a hairsbreadth of the Presidency." A friend and supporter of President Franklin D. Roosevelt and his New Deal, he was appointed to the Supreme Court by FDR in 1941, but served for just fifteen months before resigning to become the first director of the newly-created Office of War Mobilization. He became influential enough in the wartime government that many referred to him as the "Assistant President," and was on FDR's shortlist as a possible running mate in 1944. He lost out to Truman, who then tapped him as Secretary of State shortly after taking office following Roosevelt's death; he played a major role at the Potsdam Conference, and other important postwar conferences, and in 1946 was named Time's Man of the Year. Eventually his relationship with Truman became strained, however, and he resigned his position in January 1947. During his later tenure (1951-1955) as Governor of his native South Carolina, he was a defender of segregation and a vigorous critic of the Brown vs. Board of Education decision. Signed by Author

Title: All in One Lifetime [*SIGNED*]

All in One Lifetime [*SIGNED*]