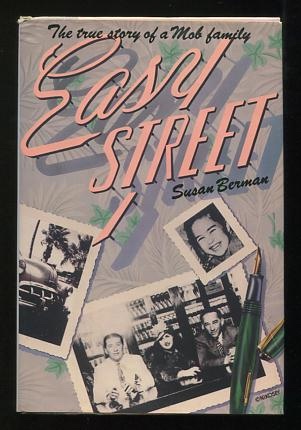 [book is only lightly shelfworn, but there are some handwritten notes in red in ink on the front endpaper, and some red-ink lines in the margins of a number of pages (and also a small amount of underlining), sprinkled throughout the book; the jacket shows a little surface wear, some dog-earing at the top of the spine, and one short closed tear at the bottom of the rear panel]. (B&W photographs) The fascinating story of the author's "discovery" of her own Jewish-gangster heritage. Her father, Davie Berman, had been a big-time Vegas gambling kingpin -- owner of the Flamingo Hotel (in which enterprise he was partnered with the eminent Benjamin "Bugsy" Siegel until the latter's demise) and later the Riviera -- but little Susie, just twelve years old when he suddenly died of a heart attack on Father's Day in 1957, was blissfully unaware of her father's background or true occupation. The book is the story of her own "investigation" (she ultimately became a journalist), which brought about her gradual and often painful awakening to the truth. Because of her family connections, and the high regard in which her father was held by his associates, she had access to people in Vegas who, let's just say, may not have been frequent interview subjects (she tends to quote them anonymously in the book: "one of my father's associates," etc.). And in a too-bizarre-for-real twist, the author herself was murdered in her Benedict Canyon (L.A.) home in December 2000 -- a single bullet to the head, which led (I can't imagine why) to speculations about it having been a mob hit. Her killing remained officially "unsolved" for many years, but in 2015, in the wake of the HBO documentary series "The Jinx," a longtime friend of Berman's, real estate heir Robert Durst, was arrested and charged with her murder. (His trial, after several delays, began on March 2, 2020, but was adjourned after six days due to the COVID-19 pandemic, and as of this writing is scheduled to resume in April 2021.) A book about the case, "Murder of a Mafia Daughter," by Cathy Scott, was originally published in 2002; an updated version appeared in 2015, after Durst's arrest.