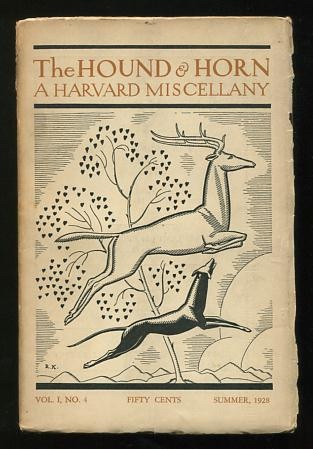 [moderate soiling and edgewear, spine browned, wrinkling to rear cover]. The final issue of the first volume of this literary quarterly, founded the previous year by then-Harvard undergraduates Lincoln Kirstein and Varian Fry. Consciously modeled after the T.S. Eliot-edited quarterly "The Criterion" (which is advertised on the first page of this issue), it was initially intended to confine its scope to the world of Harvard itself, focusing on student life and publishing work by its students and alumni -- hence the subtitle, which was dropped in 1929 as the publication broadened its scope. The cover design by Rockwell Kent, a visualization of the Ezra Pound poem The White Stag, from which the magazine had taken its name, endured until the publication was redesigned (by W.A. Dwiggins) in 1930. And speaking of T.S. Eliot, this issue is substantially devoted to him and his work, containing the second part of a critical essay by R.P. Blackmur as well as the conclusion of "A Bibliography of the Writings of Thomas Stearns Eliot" by Varian Fry. Also in this issue: "Tewa 1927," a poem by Philip Owen; "Tears for the Coward," a story by Allan R. Rosenberg; "The Mastodon," a photograph by Jere Abbott; "Crossing," a poem by J.R. Oppenheimer; "The Return," a story by J.S.C. Greene; "Chant Dissident," a poem by Dudley Fitts; two drawings by Robert T. Davis. Also: "Notes on Painting: Holland in the Seventeenth Century," by Charles L. Kuhn; "Notes on Sport," by Carl H. Pforzheimer Jr. (all about the rowing program at Harvard, which he pronounces to be "in splendid condition"); Book Reviews (including notices of Robert Graves's "Lawrence and the Arabian Adventure," about Lawrence of Arabia, and a brief review of three Philo Vance mysteries by S.S. Van Dine); Periodical Reviews (including a review of an issue of the Ezra Pound-edited "The Exile"). There is a complete index to Volume I, and the original subscription slip is still present inside the rear cover. The advertisements tend to be for publications of a similar nature, and for booksellers; there's also a two-page list of shops around the country where the journal can be obtained.