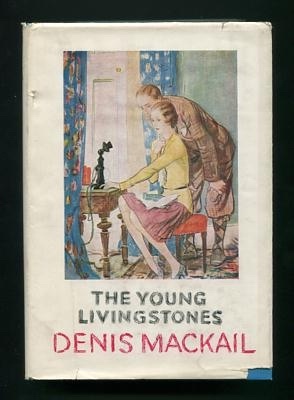 [a nice bright copy with just a touch of shelfwear, vintage price sticker (from San Francisco department store The White House) on rear pastedown; jacket a bit edgeworn and lightly soiled, tiny rectangular chip at bottom right corner of front panel]. The trials and travails of a young married couple, who "pull each other out of scrapes, fight one another's battles, and enjoy each other's society to the utmost. . . . They are always in dire financial straits, and their ingenious methods of extricating themselves would do credit to a mathematical wizard." A prolific and successful writer between the World Wars, Mackail's notoriety was eventually eclipsed by that of his older sister, the novelist Angela Thirkell -- although he's gotten some posthumous respect (and to judge from the blogosphere, a bit of a new fan base) thanks to the rediscovery and republication of his 1925 novel "Greenery Street" by Persephone Books in 2002. [NOTE: it's possible this is a later printing, as it lacks the date on the title page, the usual Houghton Mifflin practice for denoting first printings.]