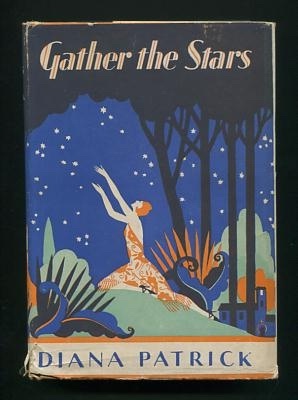 [sharp-looking copy, just a bit of deterioration to cloth at spine ends, otherwise clean and tight, with the remnants of an old price sticker on the rear pastedown; jacket is bright and attractive, with a bit of wear along upper hinges, short tears and crinkling at the base of the spine (no significant paper loss, though)]. Novel about a successful Englishman's wife, whose life is kind of a misery -- getting "nothing but tepid interest and polite indifference from her husband, and merely outward obedience from her sons" -- until she meets "a handsome young Irish youth, who is immediately infatuated with her, and gives her unbounded adoration and devotion." Diana Patrick (whose real name was Desemea Newman Wilson) was an English popular novelist who churned out a couple of dozen books during the 1920s and 1930s, then vanished into the mists of sub-literary history. (A 1931 news clipping claimed she had already written 17 books by that time; I've found titles ranging from as early as 1920 to as late as 1943, but no biographical information whatsoever; neither the British Library nor the Library of Congress have birth and death dates for her.)